After we produced a ‘teaser video‘ that provided an introduction to the CARIAA program, one of the biggest climate change adaptation research initiatives, we had another challenge: to visualize CARIAA’s findings on what warming of 1.5 degrees means for “hotspot” regions vulnerable to climate change.

To complement a brief on the topic, and to coincide with the IPCC’s Special Report on 1.5 degrees warming launched in October 2018, we developed a set of three hotspot postcards. The three cards represent deltas, glacial-dependent systems, and semi-arid lands, which contrast a present scenario visualization with a future potential scene, based on the climate change projections conducted by CARIAA researchers. The back of the cards give more detail on the impacts in an infographic style. The printed postcards were used at different climate change events, and we also created mutations of the visuals for use in a social media campaign. 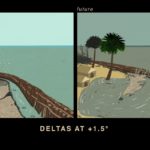 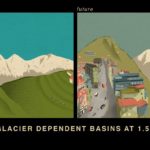 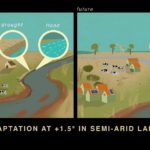 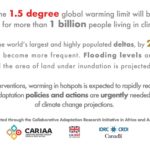 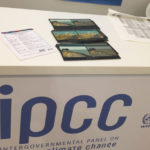