Introducing an astonishing resource: the bicycle

When discussing how to utilize our resources more efficiently, it is likely that the increased usage of renewables and energy efficiency renewals and programmes come to our mind. However, the benefits of giving the bicycle high priority in the urban plans of our settlements can also reach a surprisingly high level. 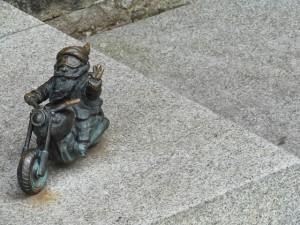 After Birmingham completed its three-parted beltway, the “concrete collar” in the 70s, the city found itself facing a minor urban catastrophe. The new high-speed transport system clearly prioritized motorists against pedestrians and cyclists, forcing the latter into the subways, and isolated the inner districts from other parts of the city. As a result, an unsustainable situation emerged with deserted and ruined houses, citizens moving out from the centre, and increasing rates of unemployment. All these forced the city governance to launch a comprehensive rehabilitation programme in 1985.

As part of the programme the “concrete collar” was removed and the exit roads were converted into ordinary crossings, while pedestrian traffic was relocated from the subways back to the surface, and more and more parts of the city centre were converted into car-free zones. This transport policy clearly serves the non-polluting modes of transport, motivating residents to choose to cycle or walk instead of driving their cars.

The positive effects of the programme showed soon, and the second largest city of England, formerly ranking 13th among British commercial destinations, moved up to the 2nd place. Furthermore the number of people visiting the city increased as well, who found an attractive, liveable and an exciting city in terms of tourism in the place of the former industrial settlement ruled by cars. The transformation helped Birmingham to take up a new function as a conference centre, and to make a dream come true by reaching the 20th place on the list of the most sustainable and liveable cities of the world.

Even world famous urban planner Jan Gehl affirmed the fact that the economic commerce of a city along with the value of its real estate, and furthermore the number of jobs, are increased by cyclist- and pedestrian-friendly measures. Reduced traffic clearly results in cleaner air and a healthier living-space. In addition, the number of road casualties can also be significantly reduced by traffic calming and appropriate street design. 40% of all trips are made in our cities, and 25% of our overall CO2 emissions come from here too; consequently traffic reduction is a valuable tool for climate action –not even to mention the significant social impacts.

But if cycling has so many positive effects, why do so many still use cars, and how could they be encouraged to shift from four to two wheels?

Many surveys have already been done to answer the seemingly simple question of why people prefer to stick to their cars. The comfort offered by the car, its interior believed to be safer than other vehicles, the free choice of the route, transporting family members or loaded shopping bags, possessing a status symbol or just plain habits – these are only some of the endless arguments that are hard to compete with. The numerous examples of transport plans failing to reach changes on their own only support the above, meaning that no matter how committed a municipality is and no matter how significant resources it spends on developments; these alone are insufficient.

What is required then? Campaigns. Most motorists know little or might even have misconceptions about the other transport modes and their benefits. Moreover, if they don’t have a clear understanding of the intentions of certain measures that restrict transport in any way, they will be nothing but opposed to these. It is interesting to see the findings of German institute Socialdata, who performed a survey on commuters not using public transport: 21% of the participants were not aware enough of the possibilities offered by public transport, 6% even had a negative opinion of it and a further 5% had been choosing to drive their cars only out of mere habituation.

For many, even a car-free day counts as a campaign, whereas if we truly intend to reach our goals, such an event is ideally backed up with a far more complex planning procedure. Such key elements as defining the goals, defining the target groups, selecting the proper messages and channels are crucial, as highlighted by the MAX-Success Project. In its work assisting municipalities, MAX offers practical ideas and examples on the proper timing of our actions, and on selecting our potential partners or the best deliverers of our messages. In relation to the latter, MAX specifies authenticity as the most important factor, and refers to Christian Ude, mayor of Munich along with deputy mayor Hep Monatzeder, whom are known to ride their bike on a daily basis. Providing the possibility of testing may also be an important campaign element for convincing, just as it was done by organizers of the public transport test month, during which the employees of various companies were motivated to give the buses and the trams a try by providing them with free tickets.

’Kopf an – Motor aus’ (Think before you drive) was one of the most successful German campaigns in recent years. Its general aim was to promote walking and cycling, but more specifically to persuade motorists to choose cycling or even walking for trips under 6 km. Nine out of a hundred applicant towns were selected to host the campaign for two years running. The launch was preceded by mindful planning; a survey was prepared on the possible ways of changing transport routines, and various partners (civilians, ministries, market researcher institutes, advertising agencies) were also involved. The implementation was divided into three phases with different messages assigned to them. The messages themselves were highlighted by inspiring slogans and also different mediums were selected to ensure that they would be delivered efficiently. The theme colour of the communication in the first phase was red in order to attract attention. The second phase, building on a green visual environment, was all about delivering solutions and hints, while the third phase in which the focus fell on reinforcing and complimenting, was associated with the colour blue.

Graz was the first city in Europe to introduce a 20 km/h speed limit in a significant range of its area. The philosophy behind the project was to focus on raising awareness, rather than implementing expensive infrastructure measures. The various target groups defined in the campaign were addressed with different tools and messages. Decision-makers were approached with the results of various analyses, while opinion leaders were won over with newsletters, the presentations of international experts and public discussions. The citizens were informed and also convinced by information booths, “living” posters, through the local newspapers, countdown advertisements (i.e. ‘Only 10/5/3… more days until the introduction of the new speed limit’) and new city maps. The mayor even offered test driving to the doubters. Not only was the campaign highly successful, but it cost incomparably less than implementing infrastructure measures.

So many cities, so many ways to exploit the possibilities offered by the bicycle. The good news is that there are countless good practices to follow, as shown by the examples above.